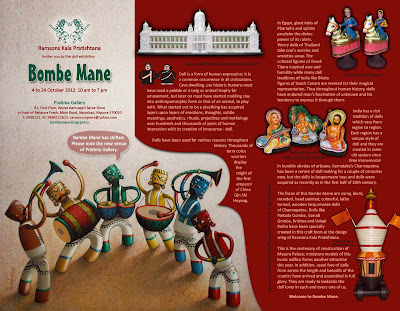 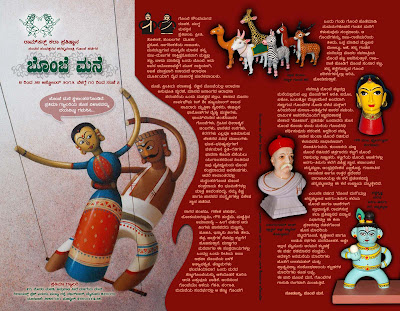 Doll is a form of human expression; it is a common occurrence in all civilizations. Cave dwelling, pre historic humans must have used a pebble or a twig or animal trophy for amusement, but later on must have started molding clay into anthropomorphic form or that of an animal, to play with. What started out to be a plaything has acquired layers upon layers of emotions, thoughts, subtle meanings, aesthetics, rituals, prejudices and mythology over hundreds and thousands of years of human interaction with its creation of innocence - doll.

Dolls have been used for various reasons throughout history. Thousands of terra cotta warriors  display the might of the first emperor of China Qin Shi Huyang. In Egypt, giant idols of Pharaohs and sphinx proclaim the divine power of its rulers. Worry dolls of Thailand take one's worries and anxieties away. The colossal figures of Greek Titans inspired awe and humility while many doll traditions of India like Bhuta figures of South Canara are revered for their magical representation. Thus throughout human history, dolls have endured man's fascination of unknown and his tendency to express it through them.

India has a rich tradition of dolls which vary from region to region. Each region has a unique style of doll and they are created in same old system since time immemorial in humble abodes of artisans. Karnataka's Channapatna has been a centre of doll making for a couple of centuries now, but the skills in lacquerware toys and dolls were acquired as recently as in the first half of 20th century.

The focus of this Bombe Mane are curvy, blunt, rounded, hand painted, colourful, lathe turned, wooden lacquerware dolls of Channapatna. Dolls like Pattada Gombe, Garudi Gombe, Krishna and Udupi Ratha have been specially created in this craft form at the design wing of Ramsons Kala Pratishtana.

This is the centenary of construction of Mysore Palace; miniature models of this iconic edifice forms another attraction this year. In addition, usual fare of dolls from across the length and breadth of the country have arrived and assembled in full glory. They are ready to bedazzle the doll lover in each and every one of us.

Welcome to Bombe Mane.
Posted by H.S. Dharmendra at 9:26 AM