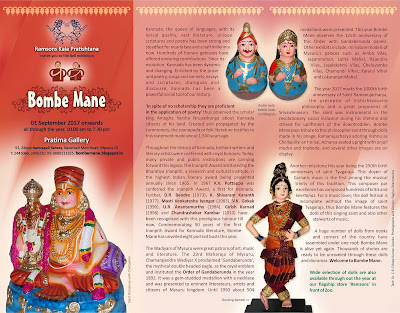 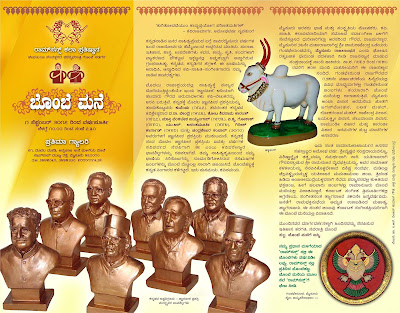 Kannada, the queen of languages, with its lyrical quality, vast literature, unique scriptures and poetry has been strong and steadfast for nearly two and a half millennia now. Many hundreds of literary geniuses have offered enduring contributions. Kannada has strong influences of Samskruta, Pali and Prakrit languages. Since its evolution, Kannada has been dynamic and changing. Enriched by the prose and poetry, songs and sonnets, essays and scriptures, dialogues and discourse, Kannada has been a powerful social tool of our history.

'In spite of no scholarship they are proficient in the application of poetry' thus observed the scholar king Amogha Varsha Nrupathunga about Kannada citizens of his land. Created and propagated by the commoners, the Jaanapada or folk literature testifies to this statement made about 1,500 years ago.

Throughout the history of Kannada, brilliant writers and literary artists were conferred with royal honours. Today, many private and public institutions are carrying forward this legacy. The Jnanpith Award instituted by the Bharatiya Jnanpith, a research and cultural institute, is the highest Indian literary award being presented annually since 1965. In 1967 K.V. Puttappa was conferred the Jnanpith Award, a first for Kannada. Further, D.R. Bendre (1973), K. Shivaram Karanth (1977), Masti Venkatesha Iyengar (1983), V.K. Gokak (1990), U.R. Anantamurthy (1994), Girish Karnad (1998) and Chandrashekar Kambar (2010) have been recognised with this prestigious honour till now. Commemorating 50 years of the first Jnanpith Award for Kannada literature, Bombe Mane has unveiled eight portrait busts this year.

The Wadiyars of Mysuru were great patrons of art, music and literature. The 23rd Maharaja of Mysuru, Chamarajendra Wadiyar X proclaimed 'Gandaberunda', the mythical double headed eagle, as the royal emblem and instituted the Order of Gandaberunda in the year 1892. It was a gem-studded medallion with a necklace and was presented to eminent litterateurs, artists and citizens of Mysuru. Until 1950 about 504 medallions have been presented. This year Bombe Mane observes the 125th anniversary of this Order with Gandaberunda panels. Other exhibits include, miniature models of Mysuru's palaces such as Amba Vilas, Jaganmohan, Lalita Mahal, Rajendra Vilas, Jayalakshmi Vilas, Cheluvamba Vilas, Chamundi Vihar, Karanji Vihar and Lokaranjan Mahal.

The year 2017 marks the 1000th birth anniversary of Saint Ramanujacharya, the preceptor of Vishishtadvaita philosophy and a great proponent of Srivaishnavism. The saint was instrumental in the revolutionary social inclusion during his lifetime and strived for upliftment of the downtrodden. Bombe Mane pays tribute to this philosopher saint through dolls made in his image. Ramanujacharya adoring Vishnu as Chellapillai on his lap, Acharya seated upright with anjali mudra and tridanda, and several other images are on display.

Another milestone this year being the 250th birth anniversary of singing saint Tyagaraja. This doyen of Carnatic music is the first among the musical trinity of this tradition. The saint's devotion towards Sri Rama is legendary and he has composed hundreds of kritis and keertanas in praise of his favourite diety. For a music lover, the doll festival is incomplete without the doll of saint Tyagaraja, thus Bombe Mane features the dolls of Tyagaraja and also other stalwarts of music.

A huge number of dolls from nooks and corners of the country have assembled under one roof; Bombe Mane is alive once again. Thousands of stories are ready to be unraveled through these dolls and dioramas.

Welcome to Bombe Mane.
Posted by H.S. Dharmendra at 3:52 AM