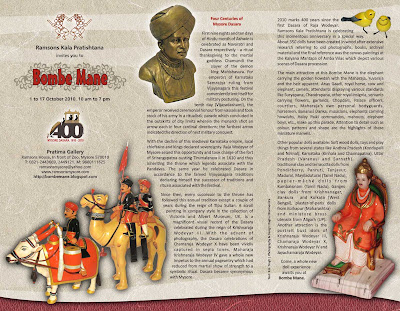 Four Centuries of Mysore Dasara
First nine nights and ten days of Hindu month of Ashwin is celebrated as Navaratri and Dasara respectively - a ritual thanksgiving to the martial goddess Chamundi the slayer of the demon king Mahishasura. For emperors of Karnataka Samrajya ruling from Vijayanagara this festival conveniently lent itself for military posturing. On the tenth day (Vijayadashami), the emperor received ceremonial honour from vassals and took stock of his army in a ritualistic parade which concluded in the outskirts of city limits wherein the monarch shot an arrow each in four cardinal directions; the farthest arrow indicated the direction of next military conquest.

With the decline of this medieval Karnataka empire, local chieftains and kings declared sovereignty. Raja Wodeyar of Mysore seized this opportunity and took charge of the fort of Srirangapatna ousting Tirumalaraya II in 1610 and thus inheriting the throne which legends associate with the Pandavas. The same year he celebrated Dasara in accordance to the famed Vijayanagara traditions declaring himself the successor of traditions and rituals associated with the festival.

Since then, every successor to the throne has followed this annual tradition except a couple of years during the reign of Tipu Sultan. A scroll painting in company style in the collection of Victoria and Albert Museum, UK, is a magnificent visual record of the Dasara celebrated during the reign of Krishnaraja Wodeyar III. With the advent of photography, the Dasara celebrations of Chamaraja Wodeyar X have been vividly captured in sepia tones. Maharaja  Krishnaraja Wodeyar IV gave a whole new impetus to the annual pageantry which had reduced from martial show of strength to a symbolic ritual. Dasara became synonymous with Mysore.

2010 marks 400 years since the first Dasara of Raja Wodeyar. Ramsons Kala Pratishtana is celebrating this momentous anniversary in a special way. About 350 dolls have been created in wood after extensive research referring to old photographs, books, archival material and the final reference was the canvas paintings at the Kalyana Mantapa of Amba Vilas which depict various scenes of Dasara procession.

Come, a whole new doll experience awaits you at Bombe Mane.
Posted by H.S. Dharmendra at 1:55 AM