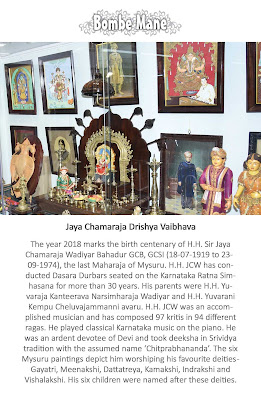 The year 2018 marks the birth centenary of H.H. Sir Jaya Chamaraja Wadiyar Bahadur GCB, GCSI (18-07-1919 to 23-09-1974), the last Maharaja of Mysuru. H.H. JCW has conducted Dasara Durbars seated on the Karnataka Ratna Simhasana for more than 30 years. His parents were H.H. Yuvaraja Kanteerava Narsimharaja Wadiyar and H.H. Yuvarani Kempu Cheluvajammanni avaru. H.H. JCW was an accomplished musician and has composed 97 kritis in 96 different ragas. He played classical Karnataka music on the piano. He was an ardent devotee of Devi and took deeksha in Srividya tradition with the assumed name 'Chitprabhananda'. The six Mysuru paintings depict him worshiping his favourite deities-Gayatri, Meenakshi, Dattatreya, Kamakshi, Indrakshi and Vishalakshi. His six children were named after these deities. 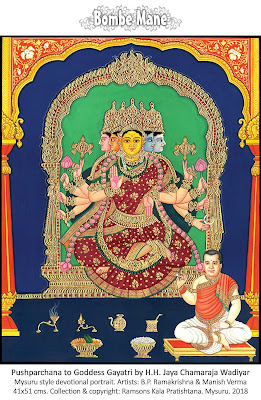 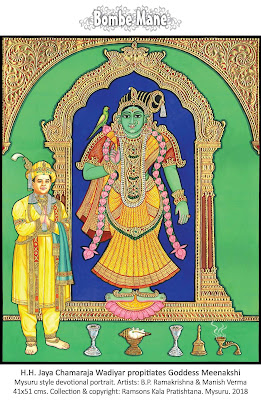 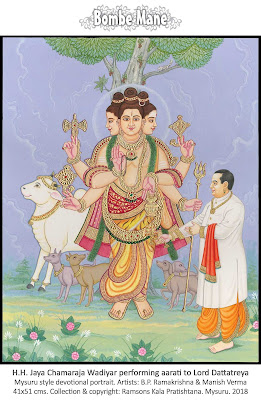 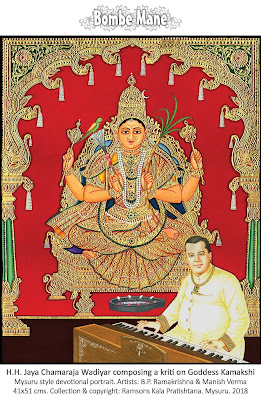 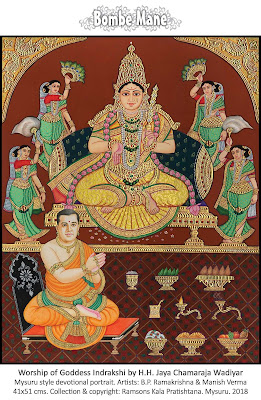 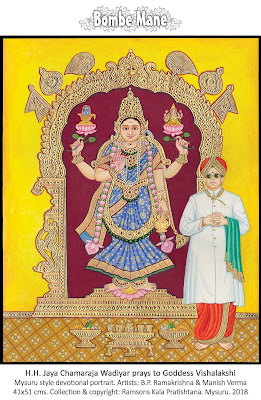 It was about two months before the inauguration of Bombe Mane 2018, RG Singh asked me to suggest one theme for special display. I was blank for sometime and it suddenly occurred to me that next year (2019) happens to be the birth centenary of H.H. Jaya Chamaraja Wadiyar, the last Maharaja of Mysuru. Along with the subject I also suggested that we can have six Mysuru style devotional portraits of JCW with his favourite deities.

I have never come across a Mysuru style portrait of JCW and neither any image that shows JCW playing a piano. I was all thrilled with the prospect of overseeing the entire process of a paintings in which one will show JCW playing a piano. After several brain storming sessions, we decided on the deities. I suggested the artists who can work on this project. The collaboration of two artists (one based in Mysuru while the other resides in Bengaluru) on such complex subject and within such a short duration of one and half months meant there could be no mistakes or errors. This also meant that I had to compose all paintings using photoshop and give it to the artists to work with. Wow, was I excited?!!!

In each painting, Ramakrishna worked on the Mysuru style deities and most of the backgrounds while Manish did all portraits of H.H. Jaya Chamaraja Wadiyar along with the background, cow & dogs in the painting of Dattatreya.

Finally just two days before 21 September 2018 the paintings were ready.