March seems to be the month when I am filled with lots of creative ideas and end up designing new dolls, board games, pawns and ideas for paintings to be commissioned. It was 28 March 2012, and I wanted to create some dolls that could be included in the Mysuru Dasara procession set.

Garudi Gombe (in Kannada, Garudi means 'magical' and Gombe is doll) are a pair of giant mobile dolls which participate in traditional processions including Dasara procession. Since these giant dolls  seem to be gliding over the ground, it looks magical for a child and hence the nomenclature. 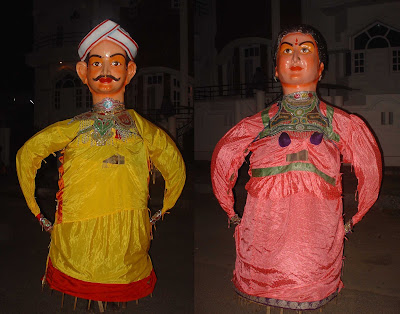 This is a folk performance art wherein the performer (usually a tall man) gets within a huge bamboo upturned basket (the basket is taller than a man) with two holes through which he can see.  A giant papier-mache head (colourful and animated) is attached on the top of the basket. The basket acts as a big torso and will have two appendages of bamboo scaffolding on either side which looks like hands. The bamboo basket is covered over with gaudy, colourful clothes. The man, inside, holds up this giant doll-suit just slightly and walks or dances. For onlookers it seems like a giant doll has come alive and moving on its own. Garudi Gombe usually comes in a pair - man and wife. There can as well be a pandit, dwarf, joker and other characters.

I designed these dolls to be created in the lathe-turned wooden lacquerware craft form of Channapatna. Gyani (R.G. Singh) was delighted to see the design and complemented me for bright and attractive colour scheme. He later gave the design to Mr. B. Venkatesh who owns the Katerpillar, a doll-making company at Channapatna. 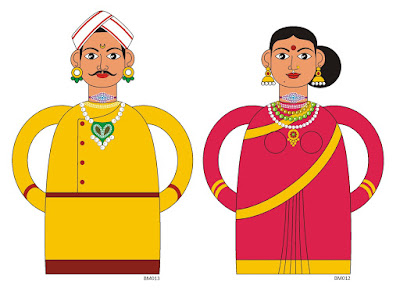 The design was probably forgotten and after 3-4 years Venkatesh finally created the dolls.
Nowadays others have copied this and have made cheaper versions of the same dolls in different colour combinations.

I used a slightly different version of this and created the logo for Bombe Mane.

I made the man wear the traditional Dasara dress of a long coat with a typically draped uttareeya and a Mysuru turban while the lady wears a saree, a gatti thali (typical Mysuru necklace), upper ear ornaments (bugudi) and hair in a heavy side bun just like royal ladies of Mysuru.

Very cute dolls, I thought of these many times and was planning to do sometimes some how , now I am glad that it's available. Another set always in my mind is those tall mens used to come in dasara procession.i made those by attaching a long paper straws into human dolls, Please think about those and make them.