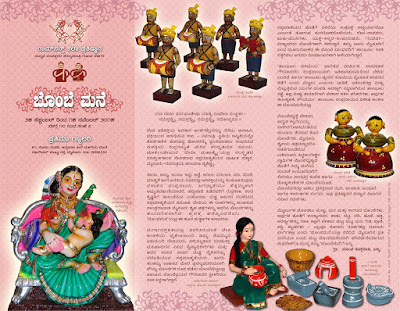 Devi or the Supreme Feminine in her universal form as 'Shakti' is revered during Navaratri. First nine nights and ten days of autumn are the time to extoll the exploits of the Divine Mother and her retinue of fearsome goddesses who decimate the mighty and loathsome Mahishasura, his dreaded generals and their havoc wreaking minions. Sapta Matrikas (seven mother goddesses) are part of Devi's retinue and they have been vividly described by sage Markandeya in the Devi Mahatmya. Worship of these seven goddesses is at the heart of the traditional Dasara celebration of Mysuru.

Devi is also venerated as the mother in Sanatana Dharma. As Yashoda she is seen nurturing baby Krishna while she also punishes the wayward ones in her incarnation as Sapta Matrikas. Both these aspects of mother have been created as dolls with traditional Mysuru style paintings as reference; these dolls will be unveiled at the eleventh edition of 'Bombe Mane.'

Durga Saptashati describes Sapta Matrikas originating from the forehead of Devi Ambika. Leaping out, slaying millions of Asuras they create chaos and obliterate the negative forces. In the form of dolls, these goddesses are seen seated on their respective mounts with a benign smile; they are ready to be placed on the doll steps and receive the veneration of doll lovers.

Worship of Sapta Matrikas and for that matter any Hindu ritual worship (Puja) is incomplete without an offering of Tamboola. The tradition of Tamboola or Paan is ubiquitous in India. In ancient India, a Paan-Daan or the betel-leaf box was perhaps the most important household article next only to the hearth; these were once used to be an integral part of the post-meal siesta or just a convivial way of spending an evening with family and friends.

Partaking 'Paan' is a romantic interlude for couples. The husband and wife leaning back on the couch after a meal, the lady preparing the Paan and giving it to her husband as talk turns into gentle flirtations and then the crunch of the paan as both savor the juicy reddish betel quid.

Bombe Mane has brought Tamboola tradition under limelight to create awareness about the healthy benefits of chewing Paan in its original form.

In addition to dolls of Yashoda Krishna and Sapta Matrikas, the design wing of Ramsons Kala Pratishtana has brought out a few more new additions. The clay set of Yediyuru Siddalingeshwara is based on Mysuru style painting. The wooden dolls of Veerabhadra Kunita and Dollu Kunita can be added to the collection of Jamboo Savari Procession. Many varieties of miniature waterfalls made in terracotta are an added attraction. The model of Crawford Hall is a tribute to the hallowed University of Mysuru celebrating its centenary. Busts of Maharajas have been crafted in plaster-of-Paris.

Dasara is the time when not only people but also dolls from across the country make a beeline to Mysuru. Hordes of dolls have already mobbed Bombe Mane. Here, every stand, shelf, nook and corner have been picketed by endearing dolls. The allure of these dolls is magic indeed. Come, be a witness to their lovable form, honest smile and twinkling eyes. Come, to 'Bombe Mane.'
Posted by H.S. Dharmendra at 6:50 AM

Dasara is the time when not only people but also dolls from across the country make a beeline to Mysuru.