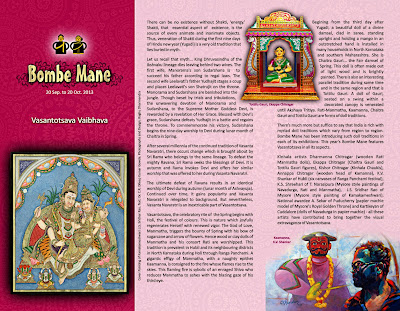 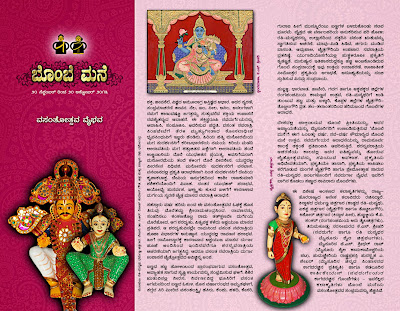 There can be no existence without Shakti, ‘energy.’ Shakti, that  essential aspect of  existence, is the source of every animate and inanimate objects. Thus, veneration of Shakti during the first nine days of Hindu new year (Yugadi) is a very old tradition that lies buried in myth.

Let us recall that myth... King Dhruvasindhu of the Ikshvaku lineage dies leaving behind two wives. The first wife, Manorama's son Sudarshana is  to succeed his father according to regal laws. The second wife Leelavati's father Yudhajit stages a coup and places Leelavati's son Shatrujit on the throne. Manorama and Sudarshana are banished into the jungle. Though beset by trials and tribulations, the unwavering devotion of Manorama and Sudarshana, to the Supreme Mother Goddess Devi, is rewarded by a revelation of Her Grace. Blessed with Devi’s grace Sudarshana, defeats Yudhajit in a battle and regains the throne. To commemmorate his victory, Sudarshana begins the nine-day worship to Devi during lunar month of Chaitra in Spring.

After several millennia of the continued tradition of Vasanta Navaratri, there occurs change which is brought about by Sri Rama who belongs to the same lineage. To defeat the mighty Ravana, Sri Rama seeks the blessings of Devi. It is autumn and Rama invokes Devi and offers her similar worship that was offered to her during Vasanta Navaratri.

The ultimate defeat of Ravana results in an identical worship of Devi during autumn (lunar month of Ashvayuja). Continued over time, it gains popularity and Vasanta Navaratri is relegated to background. But nevertheless, Vasanta Navaratri is an inextricable part of Vasantotsava.

Vasantotsava, the celebratory rite of  the Spring begins with Holi, the festival of colours. This is nature which joyfully regenerates Herself with renewed vigor. The God of Love, Manmatha, triggers the bounty of Spring with his bow of sugarcane and arrow of flowers. Hence wood or clay dolls of Manmatha and his consort Rati are worshipped. This tradition is prevalent in Hubli and its neighbouring districts in North Karnataka during Holi through Ranga Panchami. A gigantic effigy of Manmatha, with a naughty epithet Kaamanna, is consigned to the fire whose flames rise to the skies. This flaming fire is symbolic of an enraged Shiva who reduces Manmatha to ashes with the blazing gaze of his third eye.

Beginning from the third day after Yugadi, a beautiful doll of a divine damsel, clad in saree, standing upright and holding a mango in an outstretched hand is installed in many households in North Karnataka and southern Maharashtra. She is Chaitra Gauri... the Fair damsel of Spring. This doll is often made out of light wood and is brightly painted. There is also an interesting parallel tradition during same time and in the same region and that is Tottilu Gauri. A doll of Gauri, seated on a swing within a decorated canopy is venerated until Akshaya Tritiya. Rati-Manmatha, Kaamanna, Chaitra Gauri and Tottilu Gauri are forms of doll traditions.

There’s much more but suffice to say that India is rich with myriad doll traditions which vary from region to region. Bombe Mane has been introducing such doll traditions in each of its exhibitions. This year's Bombe Mane features Vasantotsava in all its aspects.