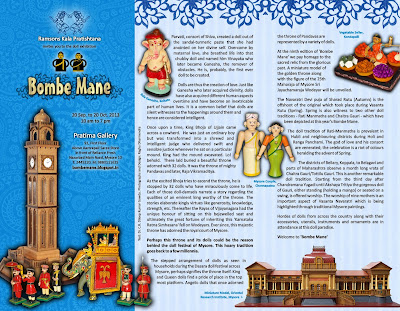 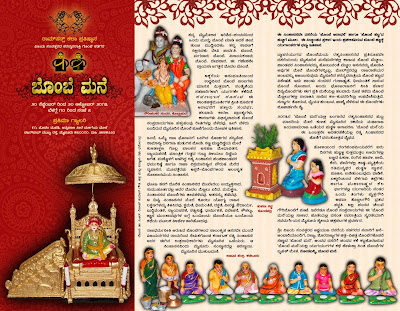 Parvati, consort of Shiva, created a doll out of the sandal-turmeric paste that she had anointed on her divine self. Overcome by maternal love, she breathed life into that chubby doll and named him Vinayaka who later became Ganesha, the remover of obstacles. He is, probably, the first ever doll to be created.

Dolls are thus the creation of love. Just like Ganesha who later acquired divinity, dolls have also acquired different human aspects overtime and have become an inextricable part of human lives. It is a common belief that dolls are silent witnesses to the happenings around them and hence are considered intelligent.

Once upon a time, King Bhoja of Ujjain came across a cowherd.  He was just an ordinary boy but was transformed into a shrewd and intelligent judge who delivered swift and sensible justice whenever he sat on a particular mound. King had the mound excavated. Lo! behold.  There laid buried a beautiful throne adorned with 32 dolls. It was the throne of mighty Pandavas and later, Raja Vikramaditya.

As the excited Bhoja tries to ascend the throne, he is stopped by 32 dolls who have miraculously come to life. Each of those doll-damsels narrate a story regarding the qualities of an eminent king worthy of the throne. The stories elaborate kingly virtues like generosity, knowledge, strength, etc. Thereafter the Rayas of Vijayanagara had the unique honour of sitting on this bejewelled seat and ultimately the great fortune of inheriting this 'Karnataka Ratna Simhasana' fell on Wodeyars. Ever since, this majestic throne has adorned the royal court of Mysore.

Perhaps this throne and its dolls could be the reason behind the doll festival of Mysore. This hoary tradition  goes back to a few millennia.

The stepped arrangement of dolls as seen in households during the Dasara doll festival across Mysore, perhaps signifies the throne itself. King and Queen dolls find a pride of place in the top most platform. Angelic dolls that once adorned the throne of Pandavas are
represented by a variety of dolls.

At the ninth edition of 'Bombe Mane' we pay homage to the sacred relic from the glorious past. A miniature model of the golden throne along with the figure of the 25th Maharaja of Mysore Sri Jayachamaraja Wodeyar will be unveiled.

The Navaratri Devi puja of Sharad Rutu (Autumn) is the offshoot of the original which took place during Vasanta Rutu (Spring). Spring is also witness to two other doll traditions - Rati Manmatha and Chaitra Gauri - which have been depicted at this year's Bombe Mane.

The doll tradition of Rati-Manmatha is prevalent in Hubli and neighbouring districts during Holi and Ranga Panchami. The god of love and his consort are venerated; the celebration is a riot of colours heralding the advent of Spring.

The districts of Bellary, Koppala, to Belagavi and parts of Maharashtra observe a month long vrata of Chaitra Gauri/Tottilu Gauri. This is another remarkable doll tradition. Starting from the third day after Chandramana Yugadi until Akshaya Tritiya the gorgeous doll of Gauri, either standing (holding a mango) or seated on a swing, is offered worship. The worship of nine mothers is an important aspect of Vasanta Navaratri which is being highlighted through traditional Mysore paintings.

Hordes of dolls from across the country along with their accessories, utensils, instruments and ornaments are in attendance at this doll paradise.