When I first visited Ramsons store in 1997, I was awestruck with so much beauty under one roof. I was like Alice in the wonderland (of handicrafts). I had been to Mysore's Cauvery Emporium, the handicrafts marketing enterprise of Karnataka government, but it paled in front of the treasure trove that Ramsons is.

Ramsons has every possible Indian handicraft product from rosewood inlay furnitures, intricately carved sandalwood figurines, traditional board games, miniature paintings, Mysore style paintings, Tanjore paintings, brass figurines, stone sculptures, papier machie products, marble vases painted with gold, and so many more.
Still, I was not happy, I looked all over again, all counters, corners, shelves, and all three floors across which the store is spread. One thing was conspicuous by its absence - clay dolls.
My obsession with dolls started when, as a kid, I saw doll festival at my maternal granny's home in Nanjanagud, during Dasara. A fairy land of dolls lay in front of me. I had never seen those dolls before, though I visited my granny quite often. I later came to know that they were carefully stored in a huge wooden chest, the entire year, only to be taken out during the festival. Beautifully coloured clay dolls of all shapes and sizes captured my imagination. It seemed like my other granny's stories of Rama, Krishna and other gods had come alive in those moon faced cute dolls.
Returning home at Mysore, a near empty showcase welcomed me. I started pestering mom to buy dolls and demanded that we celebrate doll festival at home. She yielded to my relentless demand and started buying dolls from hawkers who sold them from door to door. Whenever our relatives toured outside, they bought dolls for us. One by one, the showcase at home started filling with dolls; our own small collection was building up. Mom's mother bought and gifted a pair of pattada gombe (Raja Rani dolls in red sanders wood also called as chandanada gombe) from Tirupati. After a few years the doll hawkers came few and far between, doll supply started drying up and within a matter of a decade dolls were not available in Mysore. I started looking for dolls wherever I went; my mission was to have a decent collection of dolls.
So, I was pretty disappointed when I did not find any clay dolls at Ramsons except a few old damaged ones. When I asked Gyani (R.G. Singh), a partner of the shop about it, he told me that earlier they were selling beautiful Kolhapur dolls and in fact the store had earned the epithet 'Gombe Angadi' (The Doll Store). Since past few years the demand for dolls had died down - the reason why the store did not sell dolls anymore - he added.
I asked him why not start selling dolls again as dolls are not available in Mysore and one has to buy them either in Bangalore or Madurai which are very far from Mysore. My efforts to convince him failed. Then as a last resort I requested Gyani to buy dolls for me whenever he went out on business trips, for which he agreed. My collection started growing again. In fact, most beautiful dolls in my collection are what Gyani bought.

After my education I honed my design skills at Ramsons and finally became its official designer in 2004. I renewed my request (which had graduated to a demand by now) to Gyani about doll exhibition. Ramsons nurtures an art foundation, Ramsons Kala Pratishtana, which is working towards research, development and support of art and craft forms of the land. So my argument was that the doll-making forms a huge chunk of craft tradition and impressed upon him the fact that the doll-making tradition of Mysore has already disappeared. In the same breath I told that if we can come up with a project that can atleast help even in a small way to sustain the tradition of doll festival in Mysore; looking back now, I think this argument made an impact and Gyani started working on it mentally.
In the year 2005, just a couple of weeks before Dasara, Gyani went to Varanasi on a business trip. There he saw beautiful wooden dolls at a doll manufacturer's store. Next day morning he went to Ahilya Bai ghat for his customary dip in the Ganges. He took three dips and turned around towards the ghat. The ghat with its rows and rows of steps leading down to the river was teeming with people. Suddenly, it looked like the doll display during the doll festival at Mysore where dolls are neatly arranged on stepped platform. Returning to the hotel room Gyani called me and asked me to talk with his dad and brothers and tell them that we are having doll exhibition for the Dasara. He asked me to prepare a nice brochure and fax him a copy before getting it printed.
I was excited to receive this call from Gyani and started working on it right away. The first thing was I did was to coin the name 'Bombe Mane' for the exhibition. It means doll house or house of dolls. 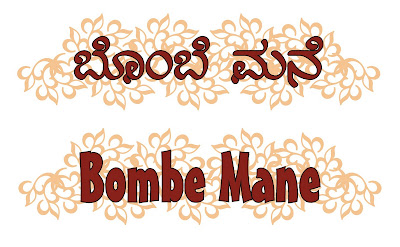 Then I conveyed the message of Gyani to his father and brothers and everyone started working at full throttle since we had just 10 days to put up an exhibition. I photographed dolls, wrote text, designed the brochure and faxed it to Gyani. Getting a green signal from him, I took the design to printer and got it printed. 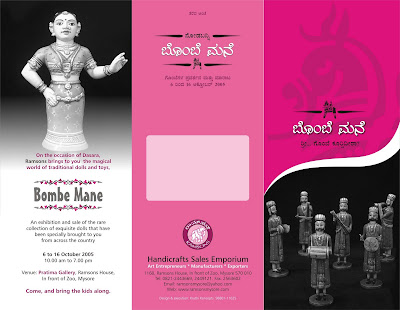 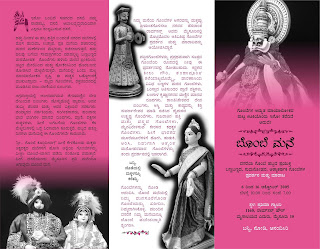 Day by day, things became hectic and the hall of Pratima Gallery started transforming in to a doll house. Invitations were posted and dolls started arriving from Varanasi, Sarnath and Jaipur. Gyani arrived a day before the inauguration of Bombe Mane. The exhibition was a huge success. Thousands of people thronged Pratima Gallery and Bombe Mane was the talk of town within couple of days.
Along with new dolls from across 10 states - Karnataka, Maharashtra, Kerala, Tamil Nadu, Andhra Pradesh, Uttar Pradesh, Rajasthan, Gujarat, West Bengal and Orissa - old dolls in the collection of Ramsons Kala Pratishtana, gifted by Smt. Kaladevi, were on display. Thus since past seven years Bombe Mane is gaining popularity not only in Mysore, but also within the state and without.
Posted by H.S. Dharmendra at 1:06 AM